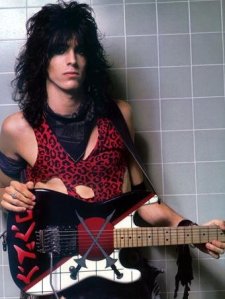 Thanks to California radio in the 80’s, I was introduced to quite a few dudes who burned; Lynch, EVH, Rhoads, Yngwie, DeVille (JK), The Nightranger guys, Gary Moore, Vivian Campbell, etc. (Yes, the list is bigger than this, but I’m not going to spend 46 minutes typing every fucker’s name out.)

To me I always kind of thought of Warren as Lynch’s little brother. I acknowledged long ago that Warren was probably the better player (Frank Zappa LOVED Warren), but I looooove first four albums Lynch. The heart wants what the ears want. I think if Lynch were in the Robin Crosby position my fucking head would’ve exploded. Matching vibrato and harmony leads? Kill me now.

But then of course I heard Racer X and Cacophony and I was off again!!

Why I love Warren: Legato madness, VIBRATO, cool blues vibe, the Lynch-isms, the Japanese art Charvel, LA hot shot guitar flash, give it to me!! Dude looked young as fuck, too. That’s always inspiring. Makes you want to pick up your guitar and follow suit. 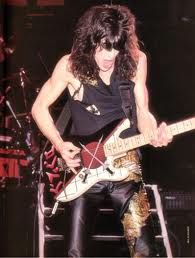 “This guitar weighs more than me!”

I was about 15 and my buddy Dave Hull had the Rock Palace Ratt performance on VHS. We’d watch those 4 songs for hours, get inspired, then go into the other room and jam our asses off. We’d get our other guitar playing buddy Eric Fraser in on the action as well. Dave may move over to bass, we switched it up. This was actually (for me anyways) one of the first experiences I had of watching a guy burn on guitar via televised recording. I’d rewind and watch and watch and watch. It was absolutely mesmerizing. I didn’t know what was going on, but I was going to learn how to do that fast finger shit if it killed me. Ed lit the fire, Warren and the others kept that shit burnin’.

The Morning After guitar duel was especially mind blowing. Left hand going wild, right hand (which was that Lynch fan picking technique – AVOID) dipping in every now and then to keep the notes flowing…Hell, you check it out!

I owned Out of the Cellar, and that was about it. This was another one of those albums where I liked pretty much every song. Warren’s solo on In Your Direction was quite frightening and definitely a highlight for me. I learned a bunch of their songs and will most likely post how-to lessons on YouTube at some stage. Like this one I did last night:

Warren? You’re a fucking gun. I’m a tad annoyed I never saw you guys live, you are such an inspiration and an ass kicker. I’d love to know about your time being roommates with Jake and George. If Carlos ever leaves, call my ass.