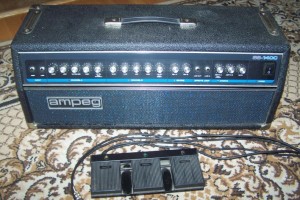 In 1989 these amp heads were $500 from Guitar Center, and worth every penny. Footswitch controlled clean – dirty, reverb, and chorus. 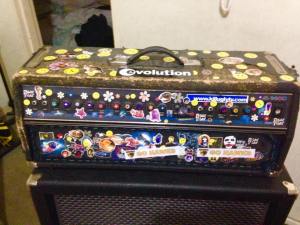 SINISTER SAM: Scot and I had the exact set up: Ibanez guitars, EMG 81 pick ups in bridge AND neck, plugged straight into the Ampeg SS140C half stack.  This was just after Pantera’s Cowboys from Hell came out, and we were looking for a sound that could cater to muted rhythms (a la mesa boogie) and which also had enough gain for leads, and this amp had both. It also had cleans (with chorus) that were extremely close to the Roland Jazz Chorus.

We were using the Marshall Artist 30 watt head, which we bought together (we were still in high school). As soon as these Ampegs came out, we were hooked. We ended up owning two each. Amp colors came in blue, then black.

Wanna hear what it sounded like recorded? Well, hear ya go (recorded at Prairie Sun Studios in Cotati, California. The lead tones in the beginning were played through the amp with Scot’s intellifex lead patch, chorus, delay, and reverb. Rhythm tracks were one each, panned hard left and right, played live through halfs stacks).

Same song live: (our rigs were the same as the recorded version – Scot had intellifex, I used head’s reverb for solos)

Live, our singer Gary was hellbent that we put some mids in there, so onstage it was always a battle; he’d walk over and put our mids at 11 o’clock, we’d walk over and put therm back to zero. This went on at every gig  (along with the sermons on how important mids were). I can appreciate mids and tube amps now, back then? Not a chance. This was djent before djent was around.

And lastly, at rehearsal (pre intellifex)

I still own mine, I think. It’s at Luke Walton’s joint, I should ask..

And to the Ampeg people responsible for making this 130 watt gem; I love you!! Never had a problem with the amp, could drop it out of a plane and the fucker would still work. We used it for years and years with no complaints, and Scott and I loved our metal tone and were extremely content.