Let’s see. This would have been about 1990. I had just moved back to piece of shit Fresno, Ca. from San Jose (see: massive step backward), and I was working at the Fresno Airport in short term parking ticket booth. Horrible job.

The ONLY redeeming aspect of that job was that I could bring my boombox to work and listen to whatever I wanted, be it cassettes, radio, etc. There was a syndicated radio station out of Texas called Z Rock, and well, it was the best thing ever! Grunge was starting to take over the airwaves and Z Rock was the antidote. The weakest shit they’d play would be cock rock, and the toughest shit would be Thrash and Death Metal. 24 hours a day.

One day on ZRock, I heard Pantera’s Cowboys From Hell. My first thought? Holy shit! Anthrax got a new guitarist and singer!! Ha ha. I was serious though. When the announcer came on and back announced the song, I was like, “Who the fuck’s Pantera? I have never heard of Pantera..” I was 21 and thought I knew every band ever. Later that same day, I would have went to Tower Records and bought the cassette. Was hooked from that day on. And I got all my friends into them.

You have to understand that not much good metal was being cranked out during the 90’s. I thought it was a fucking horrible decade, to be honest. Nirvana, flannels, Pearl fucking Jam and that goat throated singer Eddie Vedder. Yes I’m sure he’s a great guy and a nice person, but I don’t want to hear about daughters and flowing even, fuck all that. “I want my music hard and lyrical content even harder, thank you very much. I’m an angry young man and expect to be treated as such!” says 21 year old me. Now I’m an angry old man! Hear me rooooarrr! The only heavy bands I can remember from that era are Pantera, Machinehead, Korn, Deftones, and not much else. Not huge heavy bands, anyways. Slayer was always chugging, and Anthrax. But the 90’s felt dismal to me. Am I wrong? 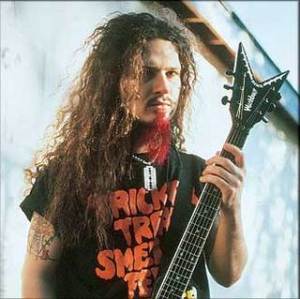 Why I love Dime: He wrote awesome riffs. He mixed pentatonic, thrash (chromatic shit), and harmonic minor stuff. His palm mutes on rhythms were THEE SHIT, and back in ’90 his tone (for me anyways) was the most brutal. Message in Blood? The binness! I love chromatic stuff and I love muted power chords. Dime did them in abundance, and I am soooo happy that he did. I went to Mike Varney’s house once and he had every pre-Cowboys Pantera release on vinyl. Rad!!

I also dig the guitars that were made by Dime, the Razorbacks. Dime, you own the ML shape!! They should just start calling it the Dimebag shape. Love it.

My friend Scot and I bought Ampeg solid state heads largely because of Dime. And King Diamond (well, I did). And they were cheap. More on that amp HERE

Dime’s lead playing was out of this world. He was more of a legato guy, but he burned, and burned a lot. Good memorable solos, not afraid of pinch harmonics or whammy bar madness. Great soloist and performer. I wished they had a touring rhythm guitarist. I know Dime handled it well on his own and all that, but I love me some rhythm guitar underneath them fuckin’ solos, aight? And it didn’t hurt that he had cool tats, loved Ace and Ed, and had MAD hair. I’m a hair guy and I think it’s part of the heavy metal package. And now that I have NO HAIR, I’m annoyed!!

RAD!! How could you NOT love that guy?

Why I love Pantera: Cowboys, Vulgar, and FBD. I think I got up to Trendkill and stopped. By then I was utterly and truly under the spell of Meshuggah. It’s funny to see the majority of the guitar players on youtube fuck up Cowboys like they do. That riff is a BITCH, and you gotta be pretty well versed at inside picking, or you’re fucked. So hats off to complicated riffs!

Dime death. I was standing in line to see a movie when my close friend texted me that someone in Pantera has been killed. I was hoping that it wasn’t Dime, but maybe someone else in the band I may have thought was a tad douchy. When it was confirmed that it was Dime, man…fucking horrible. I got on my computer and started hunting down news, forums, whatever. Some asshole was trying to sell his Damageplan ticket that had blood sprayed on it. And the metal community told him very clearly that he was a fucking idiot and to take that shit down immediately.

I have one Dime Tribute shirt, I need more. Dime? You are awesome. Those Vulgar vids are hilarious and I feel a kinship to you as a fellow Texan (born and raised in California, dad and grandmother are from Arp and Tyler, TX – I feel I have a Texas vibe). You were an amazing inspiration to many guitar players around the globe. And you continue to inspire. 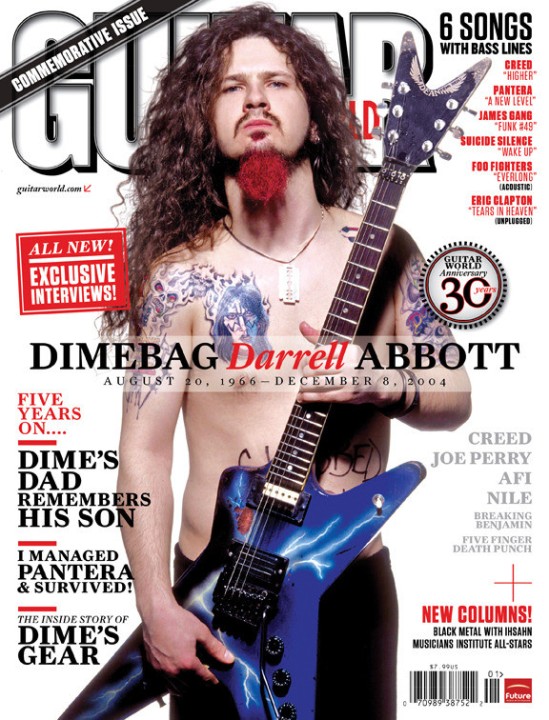