Feb 28, 2014: Melbourne Soundwave was great fun. Cassie, Damo Musclecar and myself interviewed  a lot of cool people and generally had a blast. We did this for Heavy TV, whom we love and adore. Was great to see Higgo (who was in the same tent as us) and just hang with workmates and musicians all there for one thing; HEAVY MUSIC!! Here’s some pics, if you don’t know who the artists are, tough titties. 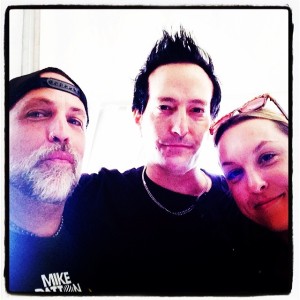 Lots of stuff happening in December

Cassie, Noodles, myself. I asked him a shitload of guitar questions. He liked that.

Sat Nov 16: I’m interviewing The Faceless (possibly Nile) at The Corner Hotel in Richmond. I’ve known Wes Hauch for a few years before he even joined The Faceless. So it’d be cool to meet him in person and have a chat to him and Michael Keene. Hopefully this happens.

Interview didn’t happen, but I hung out with him all night. I love that guy, he’s a beast!! 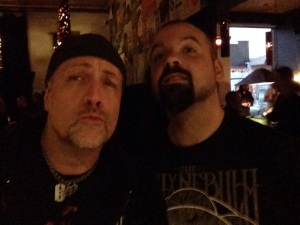 October 18th gig. I was sick as a dog. See? Headlining gig at The Tote.

WEEKEND OF OCT 12: Man oh man!! Interviewed bands at Brewtality put on by the good people at Heavy Magazine. It’s good, I get to meet new people and listen to metal! Total fuckin’ privilege. I is blessed!

That’s Steve and Phoebe from Heaven The Axe, and Dan from Frankenbok. Great pic. I also interviewed Hadal Maw, Scar the Surface, and maybe a few more? I started drinking at this point so yeah…lol.

Sunday, (with a pretty evil hangover) I got the chance to interview Devin Townsend for Heavy TV!! That’ll be posted as soon as it’s edited. The gig last night was awesome. He is a wonderful talent, that guy. And I got to tell him I love him to his face!! We talked about Meshuggah, his love for female vocalists, and the time he was going to let me sing a Strapping song at a soundcheck 15 years ago. Thanks to Century Media and Andrew Haug for teeing that up.

Tuesday June 18: I hung with Municipal Waste. Good guys, I even gave them a Hercules dual guitar stand to get it outta my house! 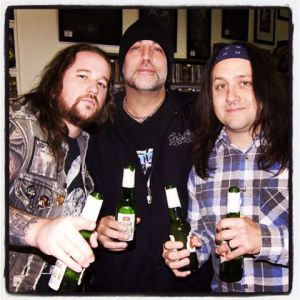 May 23: I interview Lita Ford today for HEAVY TV.

And that went real well. I love Lita Ford. I remember hearing Gotta Let Go on the radio and thinking, “rad voice”. Then I saw the music clip and went, “She plays guitar too? And does the solo? Yessah!!” So yeah, when I saw her today, I got to tell her that. The only thing hotter than a chick guitarist is TWO chick guitarists. Doing Jason Becker harmony sweeps and headbangin’ like Angus!!!! 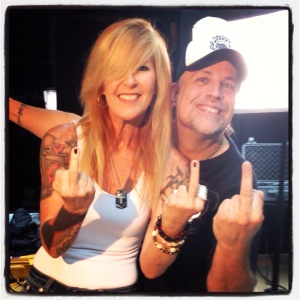