Ace Frehley got me into lead guitar. It didn’t hurt that he looked bad ass!! (yes, I know you don’t hear with your eyes, but I was TEN!!)

I believe I bought Double Platinum and Love Gun on the same day. I’m a bit bummed that I showed up to the party late, but at least I got there. 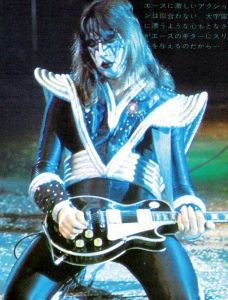 The first time I heard two handed tapping on guitar wasn’t Eruption, oh no. It was Ace’s solo on Alive II. In the 70’s KISS were absolutely at their zenith in terms of everything. Yeah, Gene may have fucked up the brand by putting their name on every single thing under the sun, but what can you do? I owned about roughly 15 of their albums, bought the KISS dolls (well, mom did as a XMas gift back in the day), and one year I was Peter Criss for Halloween. Yeah, Peter. But that was my drum phase. As a ten year old, I didn’t know they were average players. I was more into enjoying music and not worrying about what technical level these dudes were at as players. I even taped Kiss Meets the Phantom of the Park on audio tape!! We didn’t even have a fucking VCR in ’78!!

My favorite albums would be Hotter Than Hell, Dressed to Kill, Destroyer, and Rock and Roll Over. That artwork is straight up bad ass. I think I was totally done after Animalize. I do, however like The Oath off of Music from The Elder. What a putrid time for them.

Obviously I love the Ace solo album, just like most people with ears. I’m glad Ace cranked that out, as I see Gene being a bit of a dick. Gene’s solo album was pretty shit, if you ask me. My wife screams whenever she hears When You Wish Upon a Star. I laugh my ass off. I will say, as much of a douche as Gene is, I do like his bass playing. I think he writes good bass lines that are pretty musical, so hats off to him there.

Favorite era costume? Probably Destroyer or Love Gun. Although with Love Gun, it’s like he had a touring suit and a photo op suit. I like the real silver suit. I’d like to know the story behind that. So yeah, most likely getting Ace Frehley solo album portrait as a tattoo at the end of  ’14. I was gonna get Zappa, but I know a mad ass tattooist that will knock it out in no time. And he loves KISS, so why not? I’ll most likely YouTube the experience as well. If it wasn’t on video, it didn’t happen, right? 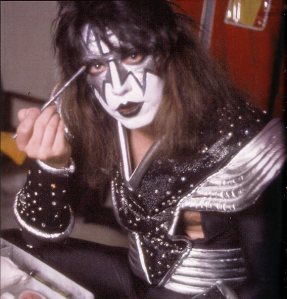 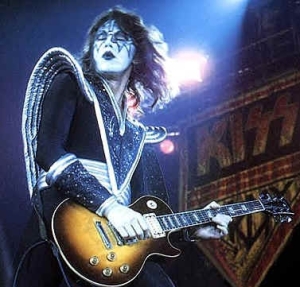 3 responses to “I love Ace Frehley”