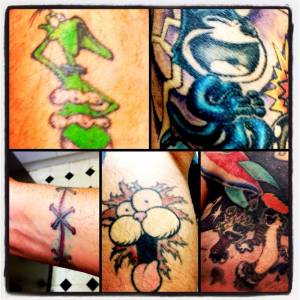 photo taken with iphone and instagrammed, do not expect magic.

I currently have 5 and want more. I see a pattern here, and it’s all by accident, pretty much. I’m not into skulls, tough guy shit, or tribal shit. I want goofy – fun stuff that’s done well. I do see some portraits in my future though. Zappa and Frehley for now.

My first tattoo was Calvin and Hobbes when I was 21. That’s on my left arm. The white is still pretty good in that one after all these years. That was done in San Jose, California.

I got Felix done next on my left arm. That was San Jose as well.

Next was Martian lady with 6 boobies and one leg, and it’s probably my favorite. That was right outer calf. The tattooist was a big biker guy, he was STOKED to do it. He said he was sick of doing tribal shit. This about ’95, so at the height of that horrible tattoo era.

Next was Bill the Cat. My friend Nate and I just got off a plane from LA and he goes, “Wanna get tats?” I of course agreed. He got a stick figure girl with big tits and I got Bill the Cat. Left calf. Hurt, I did have to take a break on the one.

Then, I moved to Australia and I had backgrounds made for both Calvin and Felix. That was ’98-ish from Living Canvas Tattoo in Eltham. Big Ross did those. We even did live on air tattooing on Triple M, yessah!!

I did get one backyard jobbie: Frankenstein stitches on my right wrist. I do like it, but I’d also like it if it looked more real. May go over it; totally undecided. That was done in 2003-ish.

This bad boy is my latest tattoo, done at Customline Tattoos by Simon King in Greensborough, he’s a bad ass!!

I’ll be going back there for my Ace Frehley portrait at some stage. I’d also like a Frank Zappa portrait, maybe a tattoo of Milky Joe, some EVH stripes, some animal stuff, more Shag stuff. I have too many ideas and not enough skin!! 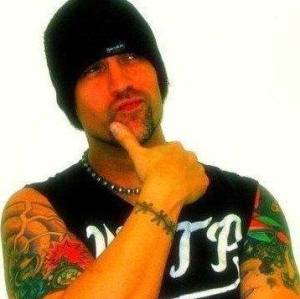